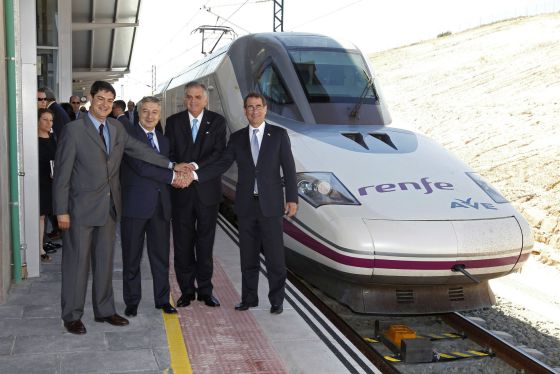 In a globalized world, economic development is increasingly dependent on efficient logistics, and the relationship between social development and accessible transport is also increasingly narrow. The competitiveness of companies is subordinate to its ability to quickly replace products and services wherever the demand arises, and personal development is closely linked to mobility for work, study or enjoyment. Concepts such as connectivity, intermodal and logistics nodes and are inexorable part of any planning horizon towards a positive future.

Suspense in transport policy: During the past two years, government investment has fallen to less than half

Spain was a leading country in transport policies, but today it is not. Between 2004 and 2011, including the onset of the economic crisis, the state invested over 17,000 million euros per year on average in transport infrastructure. As a result of this strategic commitment, railways, airports, ports and roads Spanish were among the best in Europe, they boosted our economy, generated millions of jobs and helped to structure the country and combat climate change. There were certainly very unfortunate cases of waste, but any objective and fair balance will be positive.

During the past two years, the state investment in transport systems has fallen to less than half the budgets for 2014 and planning to spend only 7,300 million to such necessity. This investment slowdown, according to the CEOE, “apart from job losses involved, seriously compromises the competitiveness of the country by hindering maintenance of the existing infrastructure, and hinder the process of continuous modernization and improvement.” The average fall was 18% in ADIF, AENA 57%, 47% Ports and 83% in SEITTSA (roads). According to business calculations, they have been lost because of this around 300,000 jobs per year. The PITVI (Plan for Infrastructure, Transport and Housing) government is only in a document of intent without prioritizing or budget, over a longer time horizon.

A public disinvestment no disconcerting add transport policy. In December 2012 it announced a “major liberalization in the railways”, which a year later was a sad offer to manage Strawberry Train. AENA privatization and management of AVE are announced, but the Bolivarian nationalization of toll roads is promoted. Railway companies RENFE and FEVE are added, to stop segregating the RENFE and ADIF itself in up to six different companies. Rates are lower in the ports to attract traffic which are already growing, but rates are rising in airports where traffic is dwindling. Minister promises to reduce tolls on the roads of their land, while Secretary of State speculates generalize tolls on all others.

By mode, the railway has received the most damage. The opening of the Barcelona-Paris route, another “socialist heritage” can not hide the stoppage of planned and financed major corridors from Europe: investment in the Mediterranean runners, central, Atlantic and the Basque will be reduced between 38% and 57% in the period 2012-2014. The divestment is primed especially in freight transport, crucial for economic recovery, but still falling in Spain (3%) while growing in Europe (18%). For its part, the application of new “public service obligations” has been deleted more than 50 lines of average distance used around a million travelers. And it does not understand the pricing policy cheapens tickets for high-speed and expensive titles for the shuttle, on which depends the mobility of the most vulnerable families.

Development is committed to advancing the liberalization of rail passenger service that the EU reserve for 2019. The minister argued “service improvements”, but the experiences of the UK and Chile suggest precisely the opposite direction: the less quality service, more insecurity and higher prices. Experts warn: an early liberalization will benefit private companies that exploit millions infrastructure that Spaniards have paid our taxes, while threatening the survival of the public operator RENFE, insufficiently prepared for the co mpetencia open to European giants Railway .

Nobody knows what the government plans for the future of the airport operator AENA. Possibly the Government does not know. AENA president has commissioned a report to the Council on Privatization to sell “up to 60% of capital,” but the minister said that “the state will keep the majority.” What majority? Does the State is the majority shareholder with 40% or maintain a majority stake of 51%? This process takes the same path of opacity and risk of irregularities other than those strongly rebuked by the Court of Auditors for Repsol, Endesa and Telefonica. We do know that Europe will not allow a private monopoly airports in Spain, so the great fractional operator network and the less profitable airports most likely would end closed.

Meanwhile, the minister boasts of “benefits” in AENA, not counting Spaniards to boast a positive accountable to any private buyers, the Government has had to sacrifice operation at airports, reducing investments, dismissing 1,500 workers and rising rates , with consequent lessening of traffic. This aimed at attracting private investors policy has jeopardized the first Spanish airport, Madrid-Barajas, the only peninsular ensuring our connectivity hub with America and Asia. The arrival of a small Norwegian operator between government fanfare, with only 500,000 new passengers per year as more optimistic forecast not offset the nearly half million lost by the departure of Easyjet and Ryanair retail operation as a result of high rates . In fact, between January and November 2013, Barajas has lost 11.4% of operations, 12.9% rating and 5.1% of goods.

Privatization plans have reached the Spanish ports only way that worked reasonably far, thanks to efficient investments made in recent years and the application of good Port Law agreed in the previous legislature by PSOE and PP. Instead of using geographic and competitive advantage of our ports, the government misleads potential new investors and new customers with uncertainties over the future ownership of these strategic infrastructure. The drop in investment is causing serious disruption to the process of the port system connectivity with major European corridors, railways and airports consequences here. Some ports isolated from the rail network are some inefficient ports. Investors delays in Algeciras and Barcelona, ​​for example, are inexplicable.

Ground transportation drag multiple problems, without any attempt at effective short-term solution is glimpsed. The most serious is the abandonment of the conservation of our roads. Technical advise to invest in maintenance equivalent to 2% of the equity value of the annual amount roads. This would involve more than 1,600 million euros per year. The crisis has already reduced this amount to a risky 1.150 million in 2011, but the 2014 budget set aside just over 800 million. It is foolhardy because the risk is no longer functional in nature, but affects the security itself, and talk less traffic accidents is talking more and more victims. To further aggravate the situation, the government announced an increase of speed limits on motorways to 130 kilometers per hour. More speed on roads worse: bad formula.

The business structure of the Spanish road transport remains a highly fragmented and uncompetitive structure. On the way we work today to losses because small entrepreneurs who borrowed to buy a truck can not afford downtime. However, the government has paralyzed the initiatives in order to improve the activity and work in the sector. Moreover, it threatens the implementation of the “Eurovignette”, as known in Europe to widespread tolls on roads in the public network. The Secretary of State confirmed the intentions, the prime minister denies it, and the minister says he is “not on the table”. It would be an injustice for carriers and a disaster for the general public every day with less income and every day more taxes and more taxes on their backs.

The saga of the toll road seems endless streams, as some Venezuelan telenovelas. And in Venezuela precisely Promotion team seems to have been inspired for his latest proposal. In January 2012 they warned of the need for an “urgent solution” to the problem, to avoid “reputational harm the industry worldwide.” They immediately stopped the previous government’s plans to save the situation by restructuring companies and concessions by developing “viable packages” with profitable and unprofitable tolls. And two years later we have nine companies in bankruptcy, “reputation” on the floor and no clear solution in sight. The Bolivarian inspiration points to the creation of a public company, a sort of bad bank motorway socialize the losses of private companies. The minister denied that includes public funding, but employers have more than 300 million tax losses to offset reduced traffic and the additional costs of expropriations. It’s not a good idea and we will oppose.

In a European context that invites the economic recovery and employment, Spain can not afford a transport policy so erratic. The minister can not hide behind the trap of “inheritance” received. Two years have passed. Now this government is inheriting itself.

It must develop a new strategy for our infrastructure and transport policy. It’s going much about it. Recover reasonable investment levels to undertake major European corridors on which depends our competitiveness. Let’s prioritize the boost to rail freight and improving metropolitan commuter for travelers. Postpone the liberalization of passenger transport until we have secured the future of our public operator RENFE under competitive conditions. We guarantee an airport operator with more than 50% of public capital and to attract and rates traffics not retract upon which the tourism industry. Let us strive to connect our ports with integrated efficient transport networks in Europe. And we improve land transport with incentives for corporate restructuring of road transport, with proper conservation of the tracks.

For our part, the Socialist parliamentary group is always open for dialogue and agreement on a new transport policy for competitiveness, employment, environmental preservation and improvement of the quality of life of the Spaniards.

Rafael Simancas PSOE spokesman in the Development Commission of the Congress.